Take a 3-D virtual tour of the historis Rice building (even the attic!), brought to you by Matterport.com. 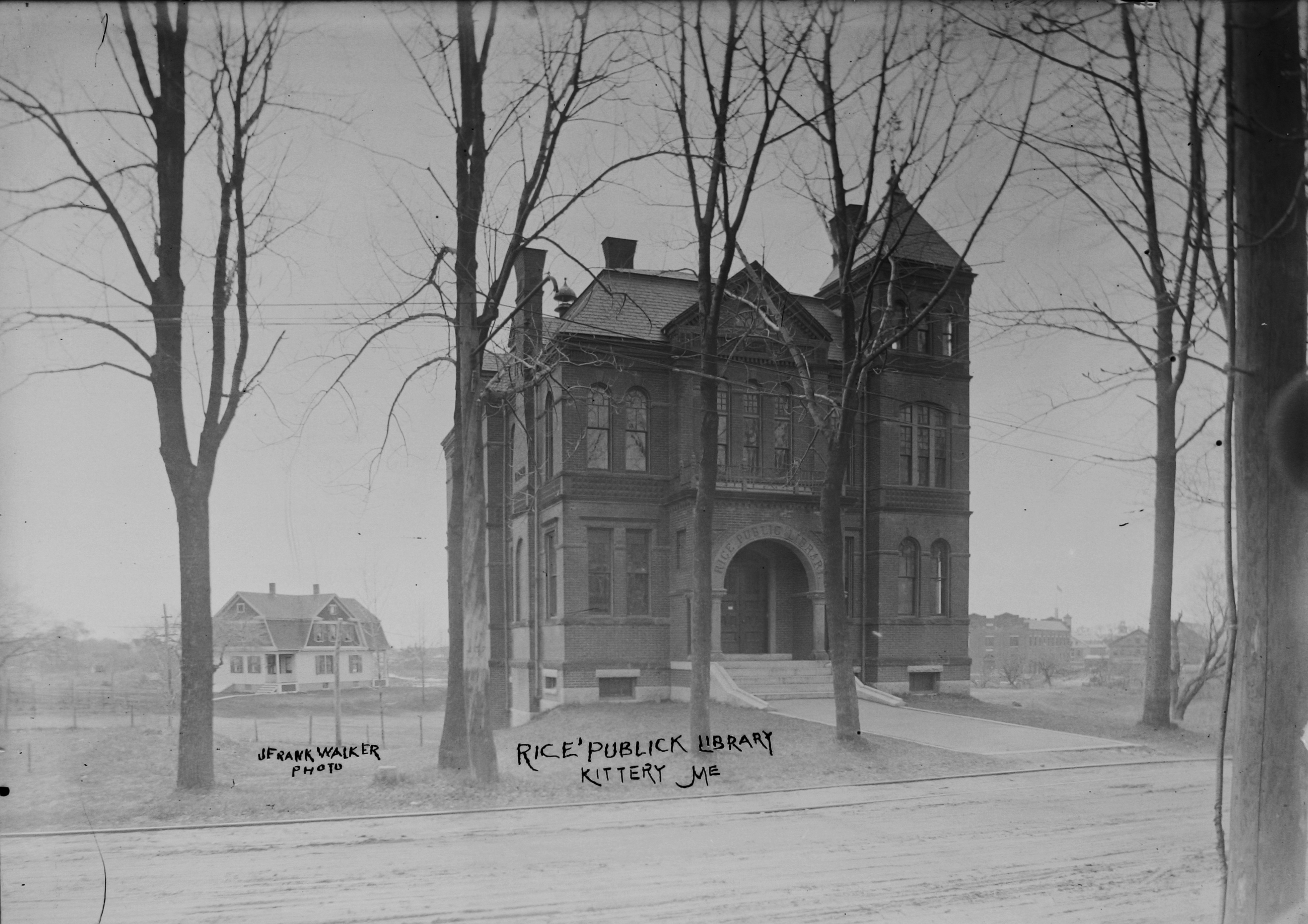 The second floor of the building served as a meeting place for grizzled old Civil War veterans from the local Grand Army of the Republic chapter. It also housed a substantial collection of stuffed birds.

Obviously, RPL has seen a lot of changes since it opened on November 5, 1888.

The library was built and furnished at a cost of $18,500. Designed by the renowned Boston architect Sheperd S. Woodcock and constructed of Philadelphia brick, the Victorian-era building had a Romanesque visual style. Noted for its marble steps, granite sills and a spectacular vaulted ceiling with stained glass panels, this was an institution in which the town of Kittery could take great pride.

Rice Public Library was founded by Arabella Rice, the youngest of four daughters born to Capt. Robert Rice and wife Charlotte, and the only one to outlive her parents. Although a lifelong resident of Portsmouth, when Arabella died in 1872 her will included bequests totaling $30,000 to honor "the wish of my beloved father to give a sum of money for educational purposes to the inhabitants of his native town of Kittery.”

Arabella stipulated in her will that none of the principal be used for the purchase of land or building. Her hope was that the town itself, or additional benefactors, would provide a home "suitable for a free public Library."

Fortunately, she included a clause allowing interest from the fund to be used toward a building if one was not established after a ten-year period. This turned out to be the case; even then, the trustees had to borrow another $5,000 on a personal note, which was paid back within five years.

Prior to this construction, the library was housed within a single room in what is now Wallingford Square.

Arabella's initials "AR" can still be seen as one approaches the building from Wentworth Street, elegantly carved within a panel to the left of the archway high over the main entrance. They are also inscribed along the Italian marble fireplace on the first floor inside the library.

The year "1888" is etched into the front of the building as well, up above the grand second-floor balcony.

In 1979, RPL was added to the National Historic Register as a treasured landmark. "Of its type and style, the Rice Public Library is by far the most outstanding building in the State of Maine", the Maine Historic Preservation Commission stated in its July 1979 nomination form.

Over time, the Rice building became too cramped for its growing collections. The old Southern York County District Courthouse, located diagonally just across the street, was purchased in 1988 and renovated into the Taylor Building annex. The judge's bench was converted into an administration desk, and the judicial chambers became the staff room.

Books were transferred from Rice into the annex through a human chain of Kittery residents one Saturday, with local police blocking off Wentworth Street. The Taylor Building, named for local physician and former library trustee Paul Taylor, opened in October 1990.

In 1991, longtime patron Sarah Almyra Roberts left the library approximately $100,000 in her will, which funded a major overhaul of the Rice building. The renovation included the removal of a false overhead which had been installed for some reason to hide the library's exquisite vaulted ceiling.

That second-story room was later dedicated in Roberts' memory, and is today used for children's programming and youth collections. A plaque erected in her honor in January 1992, located beneath a large painting of the benefactress, declares: "She loved life, the library and flowers."

The Kay Howells Room, dedicated in memory of Katherine F. Howells, is located in what used to be the basement of the Rice structure. Today it serves as the periodical room, and is also used as a meeting space for RPL's board of directors and the Friends of Rice Public Library.

Since 2007, RPL has been part of Maine's Minerva system, providing patrons with access to 13 million titles from more than 160 public, academic and special libraries.

The library also organizes events at local senior retirement housing facilities, including book and DVD deliveries, and conducts a summer reading program which has included as many as 500 children – a truly remarkable number for a town the size of Kittery. Adult education classes introducing residents to eReaders and computer programs are hosted at the library as well.

The Friends of Rice Public Library provide substantial support for the facilities, both financially and through volunteer efforts.